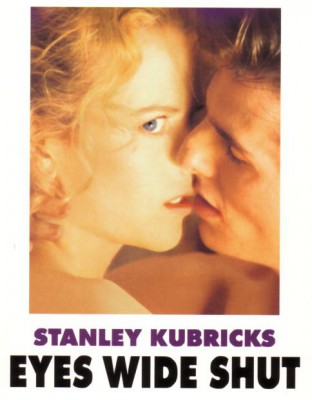 Nevertheless, this movie is a sign of the very high qualitiy director Stanley Kubrick was able to give to us. Just look at the camera work. It is excellent camera work. Although you do not have one dominating camera use like in Kubrick´s other movies. For example in „The Shining“ there are a lot of steadycam drives, or „Barry Lyndon“, a movie of zooming backwards. Every film made by Kubrick has one dominating camera use. But here it is not the case. So the visual link betwen the scenes of the movie, which is two and a half hours long, is not given. So it is not nice to watch the movie like other films by Kubrick. Kubrick is known for his special and excellent usage of camera techniques, he is – some critics say – more a photographer or a cameraman than a director. So you expect an overwhelming camera use, but you will not find it in „Eyes wide shut“.

The editing substitutes the camera work here. Just by putting the scenes together the movie became what it is now and not by Kubrick´s famous camera work of which he shows us only parts.

The acting, of course, is fantastic as we know from Kubrick´s movies. It is not naturalistic. This director does not want nature, he wants a surprising performance. A scene is shot so often till he gets a surprising element in it. It goes up to 50 shots. There are a lot of anecdotes Kubrick shooting scenes 50, 60, 70, 80, 90, sometimes more than 100 times. But this is part of his concept of film as an artform. He wants the best and he waits for the best.

The lighning, in connection with the camera work, is very important, too. He uses just real light. Any light that is seen in a scene gives the scene the light. There is no special or adding lighning of the scene. And it is a very hard job to make such scenes visible when there are no other spotlights or anything like that. If there is light in the room, if there is light at the Cristmas tree, then only these lights are used. And you can feel that special atmosphere of the film – by the way just that natural light wakens an artifical atmosphere.

I think I do not have to say much about the plot. It is based on Arthur Schnitzler´s „Traumnovelle“. Kubrick began thinking about filming that story 20 years ago. But he changed the story a bit. He situated the story in New York of the 90´s. And he cancelled some little details. If you know the novel you know the film as far as the plot is concerned. But in the film there is the possibility to focus other things. If you watch carefully you will recognise that all three main characters, Bill Harford with his wife Alice, performed by Tom Cruise and his wife Nicole Kidman, and Victor Ziegler, performed by Sidney Pollack, are lying. No one of them tells the exact truth. They try, but the do not. When Bill says to his little daughter, who wants a puppy for Christman, „we´ll see about that“, – exact the same words Dr. Haword Floyd uses in „2001 – a space oddyssey“ (1968, co-scrpl. + dir. Stanley Kubrick) to his daughter, who wants to get a bush baby for birthday, and you know she will not get a bush baby – and you know she will not get a puppy. „We´ll see about that“, but we will not see that she gets neither a bush baby nor a puppy. And Ziegler, who welcomes Alice at his party with a big compliment, is lying to her. He says it to all women, although he says he would not, but we hear he does. Alice, who talks to her husband in order to make him jealous and tells him of an imagined adultry, lies, too. It is not an adultry. Maybe she has just imagined it in the moment she is talking about it. There is only one point of Bill Harford telling the truth. He comes home after all his „erotic adventures“ and says to his wife he wants to tell her everything.Cut. We do not see him telling, not even starting the telling, we just see Alice´ reaction: crying and weeping.

If you look at the supporting characters, they are all lying or hiding information the first time we see them. There is the costume shop owner, who also offers his daughter. Or Nick Nightingale, who tells only at the second meeting more than some polite floscles, but only vague stuff. It seems to be strange if you imagine Nigfhtingale as an old friend of Bill and both have not seen each other for several years. Or the prostitute, who Bill gets happen to know is HIV positive, again at „meeting her“ secondly – he comes back to her apartment and talks to her friend who lives there.

So what is all this movie of lying and not lying – or in fact truth hiding – about? Is it really Kubrick´s last masterpiece? Maybe it is, but I am not sure about it. If you look at the signal color red, established as a signal color when you see Ziegler and Bill talking near a red (!) billard table. You get the idea that red is used as a special color. But you see it everwhere, even in unimportant scenes of packing gifts for Christmas. And then you remember Kubrick and his special sense of humour. And you see him smiling about one falling in his red trap. And when we take care of Kubrick´s humour and keep in mind that he liked to make us making fools of ourselves, this silly red makes sense, but not as a signal color. But is a joke of the director sign of a mastterpiece?

To shorten it, I switch now over to the meaning of the title.

Bill Harford tries to get and keep his eyes wide open, he wants to see the outer reality, the real truth, bu he cannot. So he tries to find the truth with his eyes completely shut to see the inner reality, the imagination and fantasy. But he cannot find truth there neither. He has to find a compromise of eyes wide open and completely shut, and that is „Eyes wide shut“. That maybe is the formula to survive the life, in Kubrick´s point of view.